doublegunshop.com - home
I am tempted to try BP for ducks this season, using brass shells in a Damascus hammer ten. Nice Shot appears to be unavailable, leaving bismuth or ITX-10.

Any advice from those with experience?
ITX 10 has worked well for me in my old 2.5" guns, 7/8 oz of 6's. It should work just as well in your BP shotgun. There is American E shot available also, much like bismuth but cheaper.

http://www.reloadingspecialtiesinc.com/Reloading_Specialties_Inc/New!_American_Shot.html
Call me odd
I got a well used L.C. Smith 10 gauge hammerless Syracuse.
Alcan all brass hulls
Remington *57 primers
Single F Black powder
MEC 10 gauge steel shot wad trimmed to fit
MEC #3 steel shot
Over shot card
Elmer's glue
Does fine
Mike
What sort of prices are we talking about? There none quoted on their site.
If you plan on using only card wads (no plastic shot cups) with your black powder loads, I highly recommend using only bismuth. All other non-toxic shot, other than steel, contains tungsten in some form. Even if the pellet is claimed to be soft, i.e. it can be crushed, the tungsten that it contains will be abrasive to your barrel.

If you don't plan on shooting more than a hand full of rounds during a hunting season, this is probably a so what. If you plan on shooting hundreds or thousands of rounds, there is potential for erosion of your chamber and chokes.
I plan on experimenting with black powder and pure copper shot for this season in the UK
The problem with copper is that it is between Bismuth and Steel on the low end of density. Plus it must be annealed to be soft enough not to score barrels. Then the price is a little high at $2.00 a pound. It might work as a lead shot replacement but I'd rather use Bismuth if you can get it.
I have two recipes that I use for a couple of old Parkers:

Could bismuth be substituted (volume due to weighing a little less than lead) directly?
Originally Posted By: randy
I have two recipes that I use for a couple of old Parkers:

Could bismuth be substituted (volume due to weighing a little less than lead) directly?

I would recommend weighing your shot charge and removing only enough shot to get a good crimp or changing wad to a Gualandi 1618 wad for your 16 gauge to accommodate the increased volume and not rely on volume measurement alone. Squib loads are usually attributed to reduced powder drops not lighter shot charge weight.
Maybe you already know but Damascus barrel guns can be shot with nitro loads. I have three 10ga Damascus guns and shoot modern 3 1/2" shells cut to 2 7/8, or whatever you want. The brass shells and BP does sound really nice if that's what you like. I'm a old BP shooter and keep a couple of boxes loaded up for fun.
I agree with you Paul, I am usually more concerned with recoil and cracking the wrist of the stock of the 110 to 120 year old doubles!
Unfortunately, I have had that experience
Thanks to all for the input. Flintfan, thanks for confirming what I had read about tungsten-based shot. Paul, I am familiar with nitro for black loads but would like to use BP.

Should buffer be used in BP bismuth loads?
Only if you want to really tighten up the patterns. But, know that the addition of buffer will raise your chamber pressures.

SRH
Originally Posted By: KY Jon
The problem with copper is that it is between Bismuth and Steel on the low end of density. Plus it must be annealed to be soft enough not to score barrels. Then the price is a little high at $2.00 a pound. It might work as a lead shot replacement but I'd rather use Bismuth if you can get it.


Copper shot is softer than TMX and TM, steel and hevi shot, your only other options are niceshot or bismuth, 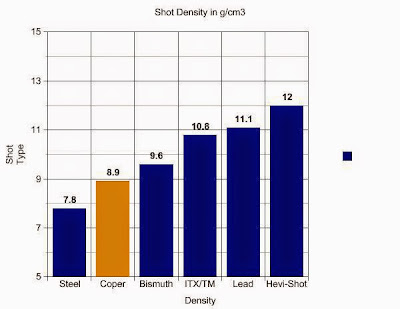 Copper is Ł18.40 / KG - making each cartridge cost 0.55 pence next to steel copper is the most cost effective - Im going to experiment with a card shot cup - im not convinced there will be any scoring to barrels - iron is much harder than copper surely?

brinell hardness scale below shows different hardness's of shot materials - if anyone knows what the hardness of your average Damascus barrel is that would be helpful but its very clear why hevishot - steel and tungsten iron are unsuitable.

Copper per cartridge is nearly 1/3rd the cost of bismuth - i am sure i could cope with annealing enough for 10 - 15 cartridges if its saving me over Ł1 per cartridge to do so. 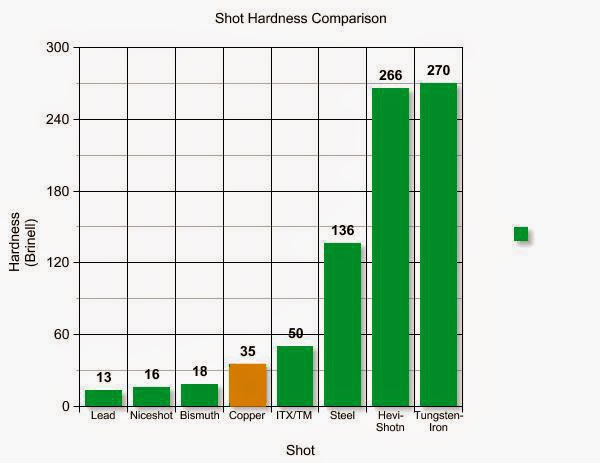 The real answer is to get a gun that shoots steel.

( Graphs from the following link: http://pointingdogblog.blogspot.co.uk/2015/05/pure-copper-shot.html )

The Solo 1250 is a couple of years old, when it is used up I will be looking for another recipe. I have not seen it, nor SR7625, nor PB in quite a while. I have buddies who go to a lot of gun shows but do not reload looking for me. Sometimes I get lucky


I did find two 1 pound containers of SR7625 at a small gun show this afternoon in Columbia.
© The DoubleGun BBS @ doublegunshop.com