doublegunshop.com - home
Silver Snipe day, anyway. I awarded custody of my late Father’s 1964 Beretta Silver Snipe, purchased with a Marine Corps re-enlistment bonus Dad got that same year.
Dad never really used the gun, I remember just a few times that he carried it, much preferring his A5, purchased when he made staff Sargent, in 1952. I have both guns.
Chris has outgrown his 20 gauge youth pump. He has outgrown most everything, stands 5ft 11 1/2” at age 13 and wears a man’s size 13 shoe. The stock will be short on the Beretta for him, at some point in time, but, for now, he can shoot it.
I awarded custody of the Beretta to him on New Years Day.
He needs practice, and some coaching. But, after a long wait for him, the temp went to 40 degrees today, and we shot a round each of trap and skeet. My eye issues are not over, but, I was happy just watching him get used to the game: 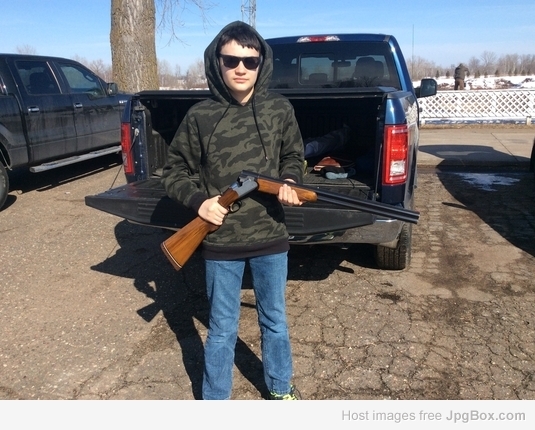 Somewhere between me holding him as a baby, trying to get him to fall asleep while “Higher Love” by Steve Winwood played, and today, he grew most of the way up. I’m trying to enjoy what is still left. He is on the honor roll in his Spanish immersion school, speaks two languages fluently, wants to learn a third, and be on the trap and skeet league when he gets to high school. He has 1 year to go. But, we will shoot buddy trap and skeet at our club this year.
Truly bad news was we were fooling around with the Mossberg .410 pump and a 28 gauge Darne after our regular rounds, shooting up the remainders of ammunition from a session of patterning each. I suggested he shoot the little 28 instead of the .410 he was using. He proceeded to demolish every pigeon he shot at with the 28.
I hope I haven’t lost possession of that one.


Best,
Ted
AWESOME!
Originally Posted By: Ted Schefelbein
....Somewhere between me holding him as a baby, trying to get him to fall asleep while “Higher Love” by Steve Winwood played, and today, he grew most of the way up....
Hate to break it to you dad, but most of the way is still to come. You're a lucky guy if he appreciates your 28ga, seems he already knows how important it is to have something from his grandpa. You're doing great with him Ted, but don't hesitate to hint about how tough it will be for the doc to set his broken arms if he ever has thoughts of pawning them.
My kid isn’t the problem with the pawn shop. That, would be my brother.
A few years past, my brother mentioned to me that he might want to pawn some of my Dad’s things. I told him to get a price from a pawn shop, and I’d beat it by at least $100. Same rules, get the money back to me and you get the stuff back, no questions asked.
I am his pawn shop, when it comes to my Dads things.
Chris has the Zodiac watch my Dad bought in South East Asia. There isn’t much left of the old watch, after his tour of duty and half a lifetime of use after. But, Chris treasures anything that was grampas, that he now owns.

Thanks, Craig. So far, he is just a really good kid.

Best,
Ted
Ted,
I had the same relationship with my son as he was growing up, and now at 44 he is my hunting and shooting buddy when he isn't too busy with the typical family stuff. It seems like your son is coming along just fine. And yes, my son also has his eye on my 29 ga. Merkel! Enjoy the ride!
Karl
Well done!!
Generational guns are special. Hope your eye issue is continuing to heal. Give him something to look forward to with the Darne.

Best, Gil
Great post. I understand the feelings you're having, Ted. My boys are all grown with families of their own. One is in AZ, and we miss him so badly. The younger is 43, and is my best friend. We work together on the farm, and play together with fast boats on the river. We drove to Mooresville, NC together yesterday to buy a Merc 2.5/260 for his "new" Allison XR2001.

Times spent with your son are gifts, to him and also to yourself. Thanks for the pic and the post.

SRH
Makes a body feel good !!
Thanks for sharing

Mike
Great story Ted!
Three boys, all grown and with their own families now. Dang, that happened quick! My boys, once they reached their teens were my exclusive hunting buddies, displacing nearly all my usual hunting friends.

I started them picking up doves and following me while quail hunting. When they wanted to carry guns, I'd let them carry a .22 with the bolt in my pocket. When we graduated to .410 singles off they went.

They go through a stage when they're sixteen or so when they want to deal direct. They still want to hunt Dad's places but with their own friends. That's ok too if you are satisfied their gun safety and common sense is sufficiently developed. But then they come back to dad after they've climbed fool's hill a while.

I didn't raise any rocket scientists, but they all support their families. You could enjoy a morning in a duck blind with any of them. Now, I am attempting to corrupt two sons in law to the dismay of my daughters...Geo
You had a lot of kids.

I went through the phase where I hunted with buddies. My Dad knew it was coming, and was good with it. I moved out, bought and trained my own Gordon Setter, a dog that came to work with me every day, and who could sleep next to a Heidelberg KORD Printing press that was running wide open.
My Dad told me hunting with that dog was almost cheating, he pointed the birds, and found them to retrieve them back to hand. His Setter (Mom’s, actually) was a show dog that would hunt, but, you were on your own for a retrieve. He would linger a few moments near a dead bird, which helped immensely.

Dad couldn’t train dogs. He loved his Setters, but, they were an unruly lot, and he knew it better than anybody. He wasn’t much of a shotgunner. He never really considered anything but a 12 gauge autoloader for himself, and, never understood my interest in double guns of any sort. But, the gift I’m giving my Son, piece by piece, at this point in his life, was given to me, the same way, by my Dad.

I think the reason my Dad struggled with a shotgun was all the time he spent with rifles, and training people with same. It was standard for him to have a new rifle or scope on a rifle, on bullseye in two rounds. Thinking back to my Dad, I’ve held the rifles in the safe back, until Chris has the shotgunning dialed in, first.
When he gets older, there are a few center fire rifles on hand, and we will work with them, and see if big game might be of interest to him. I don’t know if it will, he shows absolutely no interest at this point. I haven’t hunted deer in 40 years, but, that has more to do with my Setters, than anything else.

I am the first of my immediate family to be a passionate hunter and general gun guy. I actually brought my brother and Dad into hunting kind of late but we have made some memories all the same. Now I have two girls that I am nurturing to be in the outdoors.

It is a blessing to see them avail themselves to some great core values and to leave the I-phone behind.

I am sure your son appreciates your time and attention. Keep that up as he is going to be making policy for my retirement and I want his kind doing so 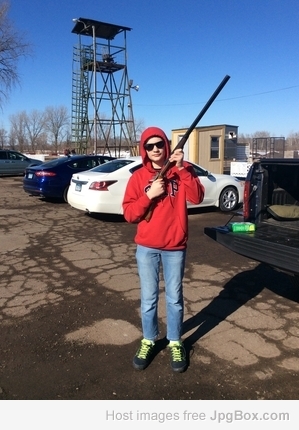 Best,
Ted
Ted, you're doing the right thing. Spending time shooting or in the woods with a teen age son sure beats having to get up at daylight to go bail one out of jail...Geo
Travis,
A guy who doesn’t have a mentor in the outdoors is usually not going to be an outdoorsman. My hat is off to someone who takes the initiative to do it on his own. You are to be commended for introducing others.

Geo,
Pretty sure my folks weren’t going to consider making my bail. If I got myself there, it would be up to me to figure my way out.
My Dad did 30 years in the Marine Corps. I would gladly have dealt with law enforcement instead of my Dad in the era when that was a concern.