doublegunshop.com - home
I've been looking for a left-handed and light, utilitarian rife for deer hunting out here for some time. My choices for the last few years have been limited to the big Weatherby magnum I use for elk or my great-granddaddy's 1886 Winchester (in .33WCF). Both do the job but neither are a great fit for most of the deer hunting circumstances I encounter out here. Enter the Ruger American. I normally don't have much time for plastic anything but progress marches on and I can see a few advantages in some applications (light weight & impervious to all but severe misuse). I also am drawn to a good value (as always...frugal to the end!) and the Ruger seems to be able to offer that as well. Can anybody here offer some insight? This ones chambered in .308 (which I now seem to have plenty of).
It's difficult to beat a Ruger in their price range. I have several Ruger rifles and revolvers and they are extremely accurate and durable. I don't think you'll be disappointed.
I have an American in 300 Blackout. shoots great. A bud of mine has a number of Amercians and everyone he has shoots sub moa with factory ammo. hard to beat.
Brian, I've been thinking of a Ruger American in 300 blackout for while. I had read that there were some issues with early production models, but that was corrected. Have you ever had any issues with your?
Brian, I'd be interested as well. I've done all the pertinent YouTube videos & reviews on the subject and bought the gun (no sense waiting on any firearms you might want now, eh?). Just waiting on the usual process that gets it to my FFL. I've read/heard good things about the trigger and the accuracy, but also about some complaints regarding the smoothness of the bolt and even some mild-gripes about it somehow unlatching from battery(?) and...even the fit and/or excessive flexibility of the stock (both of those complaints seemed a bit spurious to me). There's clearly been a flurry of activity in the local shops and obtaining it here in Denver simply wasn't possible (a big run on guns here lately it would seem). There were cheaper (& way-more expensive) LH options but...this one seemed to strike the best balance in my mind.
I was really considering one of their 6.5 creedmoors. I’m just not much of a big game hunter, but I did try one with a factory muzzle brake that I can just about hold the scope on target a pretty good way out. Accurate and a great value, except for the recent run. We’ll see.
I looked at the Ruger American a few years ago when I wanted a new .308 pig rifle to replace my heavy FN .270. Talked to a couple guys who worked at the LGS and owned RAs. They had very favorable reports about the RA for both function and accuracy. Did not buy anything, stuck with the .270, even though I wanted a lighter rifle with a short action.

A friend just bought a new rifle in 6.5 Creedmoor, and that one did replace his .270. New rifle is a Savage 110 with the Accu Trigger. He did a lot of research before he bought that one. Don't know if the Savage comes in LH.
What does the 6.5 Creedmore most closely compare with?
It is somewhat similar to the 260 Remington, a necked down 308 with less taper. The case is a little shorter, generically it can package heavy for caliber bullets in a short length action.
Thanks.
Lloyd, I'm sighting one in this morning with 180 Federals, to match the 1/10 twist of the barrel.
I'll break the barrel in with some surplus 147g steel case stuff, clean aggressively between shots, and then shoot for group.
I start all new rifles with an aggressive pre shot cleaning. Manufacturing doesn't always deliver perfect barrels.

Our firearms deer season starts Sunday, and I'm helping my nephew get set up.

If I notice anything that is unusual or may be beneficial to you, I'll report back.
I have/had a Ruger American Predator in 6.5mm Creedmoor. It shoots sub 1/2 moa with a number of factory loads. Function has been flawless. It is almost embarrassing that a rifle that cheap shoots so well.

I passed it down to my grandson after he used to take a B&C pronghorn. 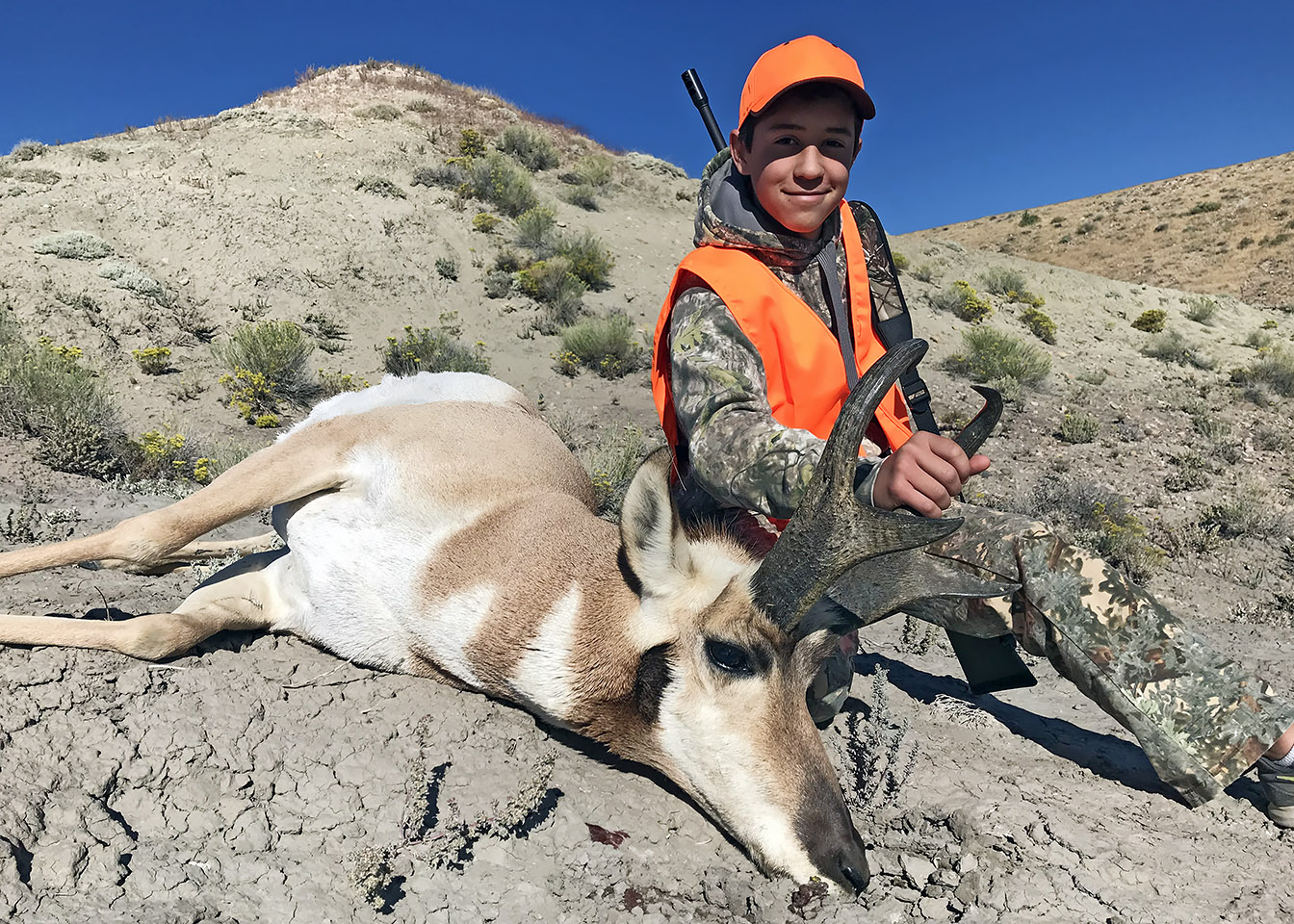 I have a left handed Ruger american in 30-06, its a great gun, i hate plastic stocks, i ordered a walnut stock for it, its a really nice shooting rifle, for the money you cant beat it
Folks: Thank you all. Waiting patiently for this rifle to get here. CZ: Looking forward to hearing about your results.
Shot the Ruger American .308 this morning.
Cleaned the barrel briskly. Bronze brush, solvent, etc.
A little oil, but not shavings or carbpn.
Started out with 147g surplus ammunition, 3 shot groups, clean, 3 shots, etc.
1" groups.
168 FGMM reloads, 3/4" groups
moved up to 180g Federal Game shok's, 1" groups at 100 yds
Tried 180g Remington Cor-lokts, same 1" groups

The only thing I didn't like, was that single loading cartridges was a little bit fiddley.
You needed to tip the cartridge up a little bit For the bolt to pick it up on top of the magazine and chamber it.
Ultimately I ended up Starting every single cartridge into the chamber By hand instead of pushing them in with the bolt.
I had to tip them up To keep them from Hanging up on the feed ramp.

Feeding was not a problem if the round was being stripped from the magazine.
That's the only Thing I noticed about the rifle that I didn't like.

They seem a good value package.
CZ: Appreciate all that. I've been handloading .308 to feed an AR-10 and have stocked up a fairly decent backlog of shells. Most of it is Match grade 168-grain, but I do also have a fair amount of 150-grain military stuff. Either should work for deer out here. I can always handload additional stuff if needed now too.
Happy to help Lloyd.
Around here, shelves are empty of ammunition.
The 147 surplus ammo won't expand on a whitetail. 308 in, 308 out. FGMM as well.

A 20$ box of Cor-Lokt's will work surprisingly well in that rifle.
Its the old argument about about bullet placement or terminal performance. If I have to choose, I'll fall on the side of placement, but it is sure nice to have good terminal performance as well. If time allows, I'll load up some 165-grain Sierra Game Kings that I used to load for an old pet .30-06 load. I'm guessing that they'll do the job as well. God only know what else I've got laying around here. If necessary, I'll track some other premium hunting "pills" down somewhere. Thirty caliber stuff shouldn't be impossible to find just yet.
Clean kill, and recovery, should be your priorities when selecting a bullet. Because the Killzone on a Whitetail deer is so large, ultimate accuracy isn’t essential. If you are a handloader, you can certainly optimize the charge weight for your favorite bullet.

Military jacketed bullets are the absolute worst for recovery.

I meant to say, that the construction and the barrel twist of the Ruger American rifle is very forgiving with respect to bullet weight. Though I didn’t shoot anything through it today less than 147 grains. It was very consistent at the three different bullet weights I shot. 1/10 seems very forgiving.
Buddy of mine has a RA in 450 BM, 5 shot groups just under an inch. I believe he uses Black Butterfly ammo 160 maybe 180 screaming down rang over 2700 fps is a thumper. One heck of a rifle
© The DoubleGun BBS @ doublegunshop.com