doublegunshop.com - home
I need some cast off on this Rizzini br550 but the grain in the wrist scares me. The photos show the 16 yd. pattern plate with a 3 to 4 inch to the left pattern and 3 views of the wrist. The question is should I consider bending for cast off, relieving the cheek area of the stock or a bit of both? We're probably talking about 3/16 to 1/4 of cast or relieve. Any thoughts?
[img]http://[IMG]https://www.jpgbox.com/jpg/62895_600x400.jpg[/img][/img]
[img]http://[IMG]https://www.jpgbox.com/jpg/62896_600x400.jpg[/img][/img]
[img]http://[IMG]https://www.jpgbox.com/jpg/62898_600x400.jpg[/img][/img]
[img]http://[IMG]https://www.jpgbox.com/jpg/62897_600x400.jpg[/img][/img]
Not a gun that I personally would bend and I just bent a Rizzini this week for drop a full 1/2".
Thanks, with the stock bolt I suspect it would need also a closer look there. Sorry the picts didn't upload. I'm still trying to figure that out.
It may be a matter of a combination .Probobly not a great problem to someone who knows what they are doing ,but not a job to do if you dont
I had a B Rizzini 20b that was too straight for me,looked at taking some wood off but after a little bit of measuring and looking I realised that there just wasn`t much wood between the stock face and the bolt channel.Decided moing it on was safest bet!!!
I've shaved and cut back stocks and refinished but I've never tried to bend one. Without practice I'd not like to jump into this stock. It never occured to me that the bolt hole could be to close to the surface of the stock. The 101's and other stock bolted guns I've worked on had plenty of meat in where and what needed to be removed. I'll pull the stock and see what it looks like. In all I'm going to have to have someone work on it for me. At the moment I'm not in a situation to do it myself. Thanks, for your insights.
For Borderbill 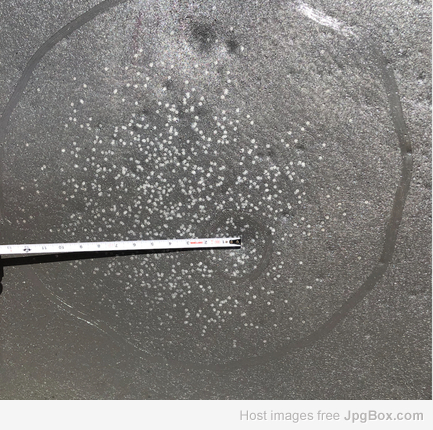 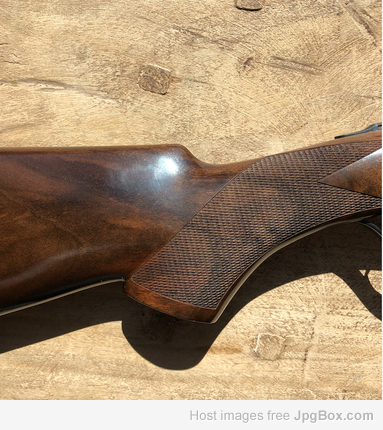 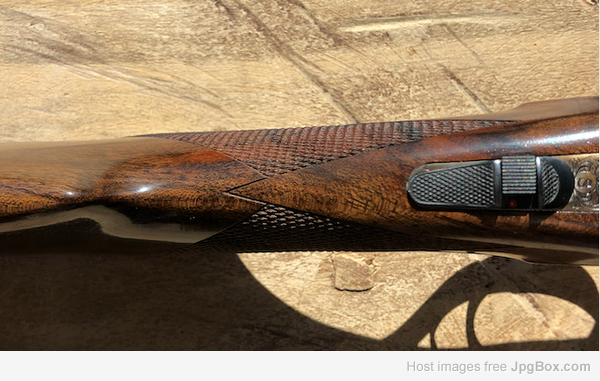 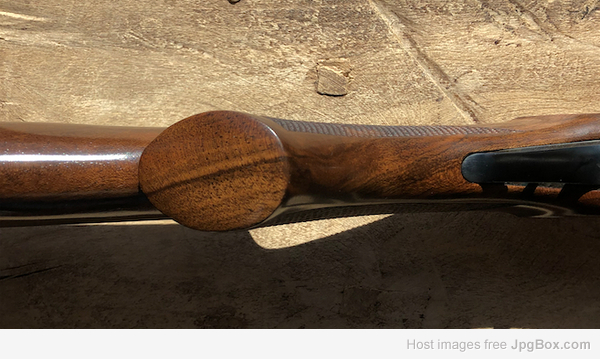 Thank you Sir.
Would you do anything if center of poi was 2” to right from current photo?

That’s a bend of 1/8th” at face.
Considerably less at the grip.


Cupping the comb ruins the stock for resale.

Bending it, it might break someday. Would have to buy a new machine fitted stock from Rizzini.

Sell it and try again.

Those seem to be your choices.

I’d probably order one made to measure and sell this one, or see if I could have it bent, and take my chances.

Someday, for some of these guns, is decades away.

Post back which you choose.
IDK why so many nice Italian O/Us are stocked so high. IME, Berettas aren't usually as high as Zoli, Guerini, Rizzini, FAIR, etc. If I ever bought a new one of them I'd have it stocked to my dimensions. They all shoot way too high for me, out of the box.
Not mentioned in this discussion that I can see is that most throughbolt stocked guns can be adjusted for cast by reinleting the head of the stock.

I had this done to a K80 by the Krieghoff shop about 30 years ago. They increased cast off @ the heel by 1/4" & fit to the head of the stock & tang remained perfect. You could see that they used some epoxy bedding internally w/the stock removed.

I shot that gun for a long time & never had any issues with the work & it wasn't expensive to have done. I'm sure there are other gunsmiths out there that can do this for you. Michael Yardley mentions this method of adjusting cast in his book "Gunfitting".
Friend had the same issue a couple years ago. I suggested he build it up and see how much it moved in the wrong direction. What he found out was that when he built it up 1/4" it moved about three to four inches. So he looked at shaving it down 1/4" and decided not to do it. It would have cupped it out. The height was fine and he might even had ended up with a lower comb he figured. Had it been too high he might have tried it. So down the road that gun went but at least it was unmolested. Too many are not.
Thanks for the ideas gentlemen. I took the stock off and there is not much material there to cup the stock much. That's not my first choice, though I did it when Dockwiller made me a stock for my trap gun in the late eightes at Redlands. I would shoot it and walk back to the shop and he'd take a little off. We did this until it was perfect,... and it still is. The idea of inleting the head of the stock for cast is intriguing. With the scalloping on the receiver it would take some skill to look right. I have two of these that shoot in the same place so my costs are doubled. The grain on the other is straighter and bending may not be as much of an issue. Not so much in a hurry now. I screwd up my left shoulder Friday hooking up the gooseneck horse trailer. Hopefully not to bad, but enough to get an MRI.
© The DoubleGun BBS @ doublegunshop.com