Proof date 294 (Feb 1994) Followed by the Suhl proof mark
https://www.shotguns.se/html/germany_1992--.html
Thanks to all for the information. The date seems reasonable (Feb, 1994) as I received the gun (very slightly used) as a retirement gift from the last company I worked for (Dec, 2010). The only confusion now is that the "eagle" proof mark on my gun and the one on the site skeettx provided are nowhere near alike.
How about these marks?

https://www.shotguns.se/html/east_germany.html
Nope, skeettx, close but no cigar. I'm going to try to post the photo on another forum and then provide the link so you can look at it.
OK, skeettx and others, take a look of the flats at https://www.trapshooters.com/threads/merkel-proof-marks.901399/
Bingo

1968 West Germany (BDR) updated the proof laws according to the international standard.

#3 on the bottom half of the proof map. 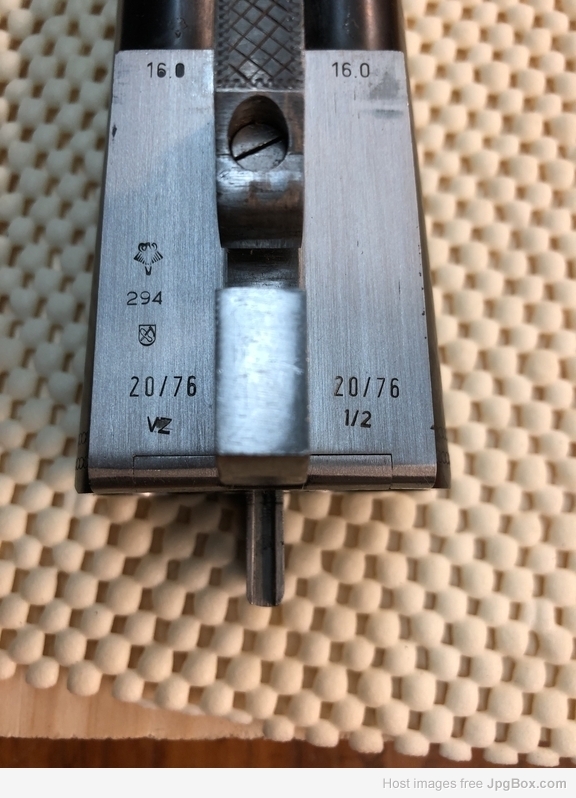 There must be a letter under the Federal Eagle so it looks to be a poorly stamped >>V<< for Forced/Magnum(voluntary submission) proof.

The one fundamental difference between the guns is that the Browning has a POW grip and field style forend whereas the Merkel has a straight had stock and splinter forend. There's not much wood to grab on the Merkel. We shall see.........
Originally Posted by Der Ami
OK, now what about the VZ on the right barrel? I vote for Verbessert(?) Zylinder(?) or Improved Cylinder . This matches what would be common with a half choke left barrel.
Mike
Yes Mike, it stands for "Verbesserter Zylinder" & it cost an extra fee!

Wolfgang
From a 1980 Merkel Catalogue: