doublegunshop.com - home
Not sure if this thread is appropriate for this forum, but since it features a John Dubiel / Eric Johnson Winchester Model 52 used at the 1939 Pershing Trophy match, perhaps it fits!

I recently acquired a 1929 Dubiel Winchester Model 52, and found that R.C. Pope had used a similar one as part of the the 1939 US Pershing Trophy team, and went looking for a bit more info.

R. C. Pope (1901-1988) was a native Texan, and chemist/chemical engineer by profession. He was a president of the Dallas Rifle Club, and enjoyed a keen competition and friendship with Thurman Randle, who was a member of the 1931 Pershing Trophy team, and the coach of the 1937 team.

Using a bit of Google-fu, I was able to find Pope's grandson, who still has Pope's Dubiel Win 52, lives fairly close to me, and let me stop by and take some photos.

The Pershing Trophy was presented to the NRA in 1931 by Gen. John J. Pershing, formerly Commander of the U.S. Expeditionary Force in World War 1. This trophy was to be contested by teams of 10 firing members from Great Britain, the United States and (later) Canada firing shoulder-to-shoulder (prone) the Dewar course (20 shots at 50 yds & 20 shots at 100 yds) on the official NRA of America targets. The match, considered one of the premier international smallbore competitions, was first fired in 1931 at Bisley Range in the UK, and the British won by 2 points. After a pause during the Depression, the Americans again went to Bisley in 1937, and again lost by 2 points.

To select the 1939 Pershing team, tryouts were held in 8 regions across the country. The tryouts were invitation-only, the top 50 ranked iron-sight and top 50 any-sight competitors, as well as those who had shot a Dewar average of 394x400 or better in 10 or more tournaments the previous year. Women were excluded, as the team members were going to be sharing rooms, as were shooters employed by ammunition companies, to avoid bias in equipment selection. The result was 83 top shooters spread across 8 regions, and this generated much publicity and enthusiasm. The tryouts were held over two days, shooting two Dewar courses per day, with the regional winner getting a place on the team. The final 4 shooters were chosen by the Pershing team leaders from the remaining tryout competitors, based on performance during the season and at the tryouts.

It ended up that 10 of the 12 shooters on the 1939 Pershing team had been on the victorious and record-breaking 1938 Dewar team.

Pope had shot competitively since he was young, but his earliest national success was selection to the 1932 US Dewar team. Pope won multiple Texas and regional championships, another spot on the US Dewar team in 1938, and then finally won the southwest regional tryout for a place on the 1939 US Pershing team.

The 1939 issues of the American Rifleman magazine have some good articles on the competition.

The trip to England was quite an adventure for all involved, and was the first time for Pope and Hamby, among others, to travel outside the country. Naturally everyone took cameras; see a few of the photos below. Charlie Hamby also kept a diary of the trip, which informs much of the timeline and trip details related below. 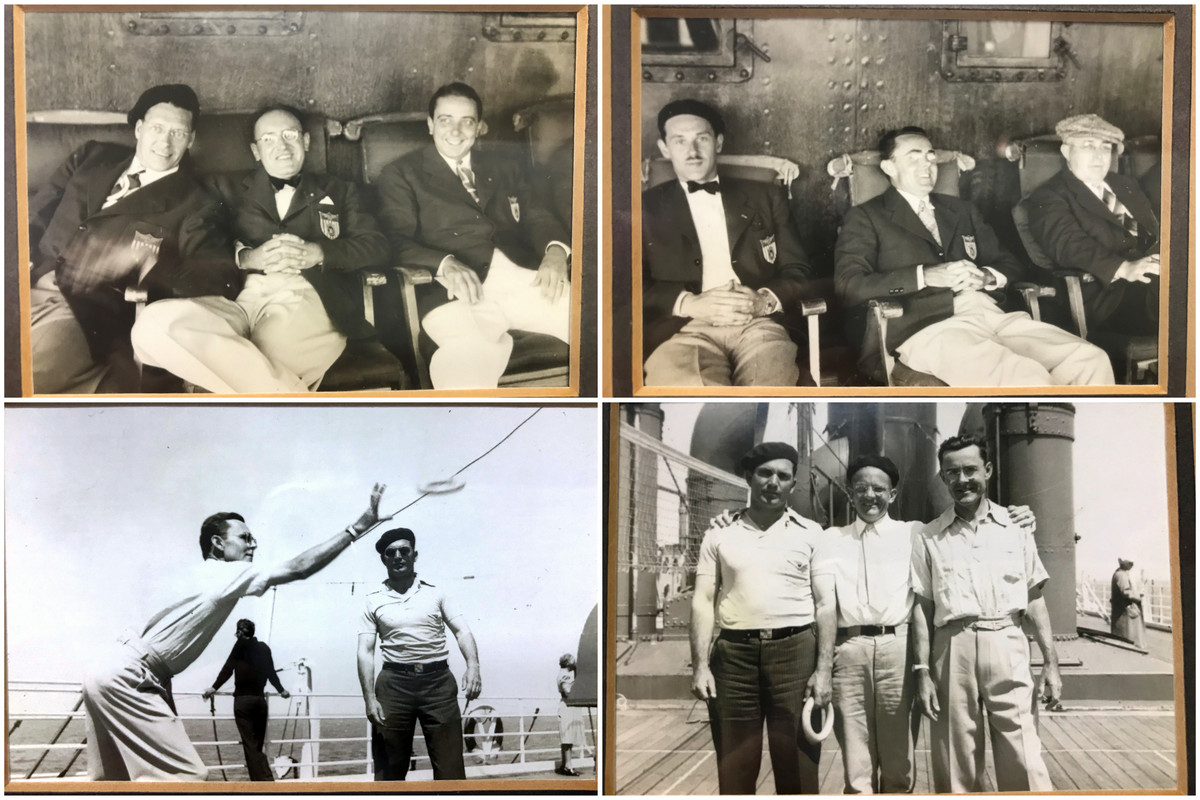 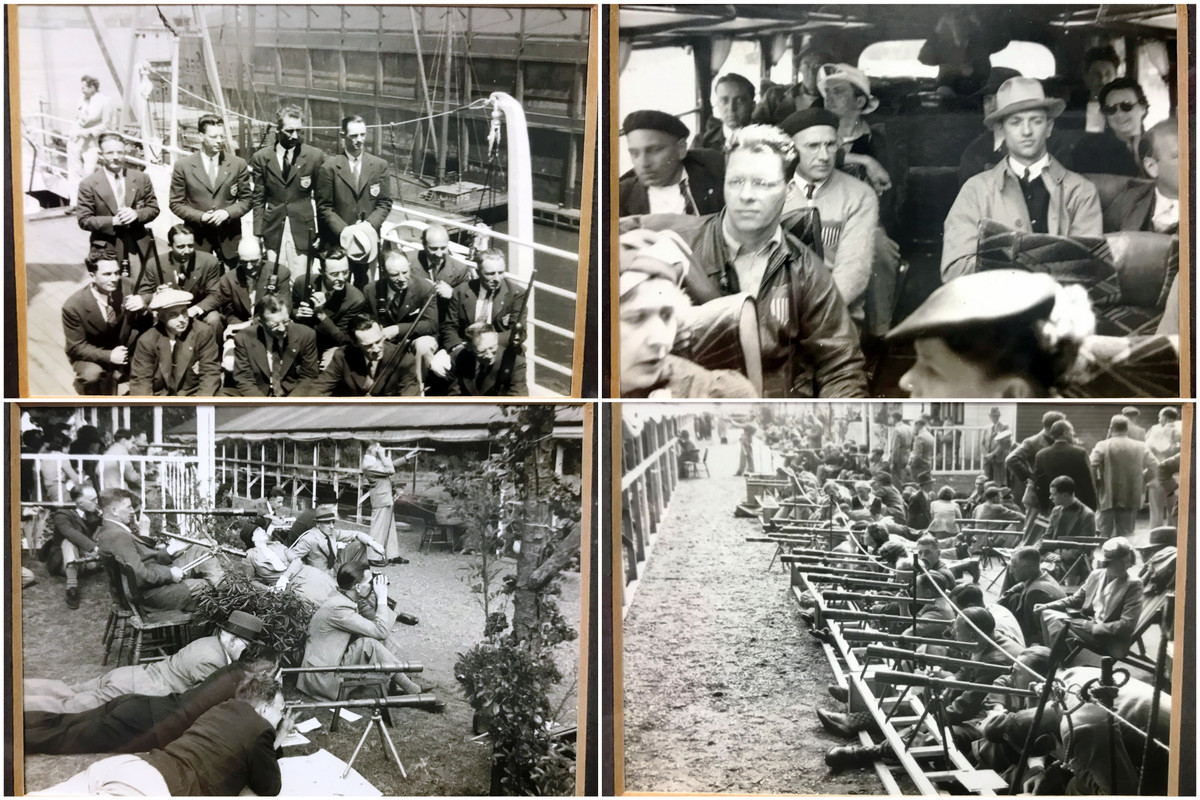 The Pershing team first assembled June 19, 1939 in Washington DC, did some sightseeing, and met dignitaries at the NRA, the State Dept, and the British embassy. Then they had a banquet, got their team sport coats, and posed for "batteries" of press photos. There was a big crowd to see them off as their Pullman car departed for New York at midnight on June 20.

They boarded the SS President Roosevelt at 9am in NYC the next day (Wed June 21), and sailed at noon "amid the cheers of an enormous crowd". The boat was relatively small (535 ft long), with only 86 passengers and a fair amount of cargo, but they showed movies, had games, and the food was good. Per Hamby: "We eat so often and so much that I have to pass up some of them. A fellow can hold just so much and no more." Overall, it was a nice voyage, other than teammate John Wark accidently breaking his trigger finger(!) on day 2.

After a brief stop in Cobh, Ireland, they arrived Southampton evening of Thursday, June 29. Took a train to London, arrived ~midnight at Regent Palace Hotel (per Hamby: "Real swanky joint. In the USA, it would run $5 per day.").

The Regent Palace was ~10 miles from the Ham and Petersham Rifle Club, used instead of the traditional Bisley Range, because Bisley was busy training soldiers. Hence, the British matches for this year were referred to as "Bisley at Ham". The rifle club still exists, as does part of the hotel.

Monday 7/3 - Friday 7/7 Free time in the morning, then took a ~45 min bus ride to practice at Ham and Petersham, leaving 1pm and returning 9pm. This gave enough time to shoot the Dewar course, break for afternoon tea, then shoot the Dewar course again. The range was different to what the Americans were used to - "Trickiest range we have ever fired on" - and initial results were not so good. July 4 was weird - just another day!

On Saturday 7/8 the British National Small Bore matches commenced. As a warm-up for the Pershing, 6 members each of the British and American teams fired the 400 Club match, consisting of shooters who had all scored a perfect 400 on the Dewar course (20 @ 50 yds & 20 @ 100 yds) in competition. The Americans won that evening, in the wind & rain, by 2 pts, and with Wark shooting, not so well, with his broken finger (British comment: "It was unfortunate that he fractured his shooting finger on the sea journey across, but having seen a little of his antics whilst in this country, I marvel that he did not break his neck!").

The Pershing Match organizers had originally tried to set up a transatlantic real-time radio broadcast on Saturday July 8. Unfortunately, with the change of venue from Bisley to Ham and Petersham, the match got pushed back to Sunday July 9, and English law prohibited the broadcast of sporting events on a Sunday. There was, however, a big crowd of spectators, many with telescopes to watch every shot.

On the day of the Pershing Match, it was decided that the alternates would be John Wark, due to his broken finger, and Carl Jackson, because he had scraped up his elbows in practice. The remaining 10 shooters shot the Dewar course, with each shooter being coached by a teammate (e.g. Hamby coaching Pope, and later Hamby getting coached). The Americans won by a comfortable 19 pts, compared to 2 pt losses in the 1931 & 1937 matches. Much 1939-style partying ensued!

In the September 1939 American Rifleman "The Pershing Match" article (linked above), Pope's gun is listed as having a Dubiel barrel. This is true, but it's also an Eric Johnson barrel, apparently from the time John Dubiel & Eric Johnson were partners at Dubiel Arms, April 1932 to April 1933. Hence, the US Pershing Cup team actually fielded at least 4 EJ barrels, including the top overall scorer (Schweitzer). In fact, at least one additional shooter used an EJ barrel, as Hamby's Rem 37 was not performing well in practice, so he borrowed Pope's Dubiel/EJ Win 52 for the match.

The official team photo for the US team is shown below, taken just before the match. Notice that R.C. Pope is proudly displaying the Texas medallion inset on the side of "Dinny", his John Dubiel / Eric Johnson Winchester Model 52, and Charles Hamby is displaying his customized Remington Model 37. 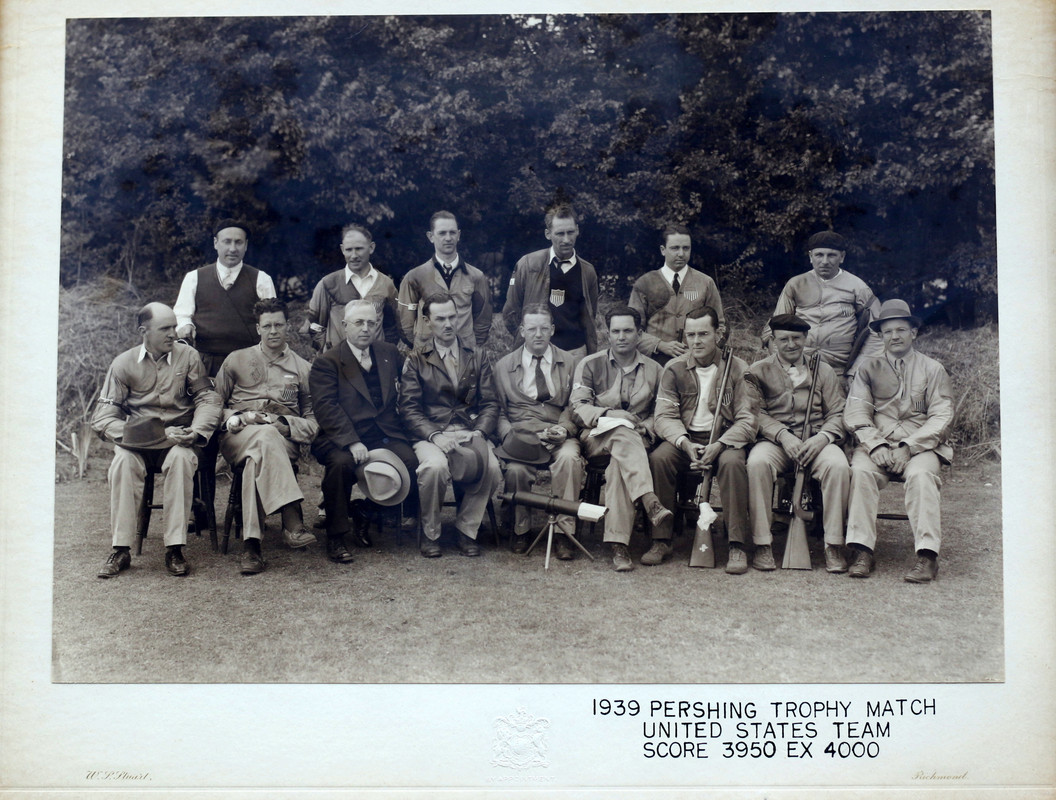 Here is the official photo of the combined US & British teams: 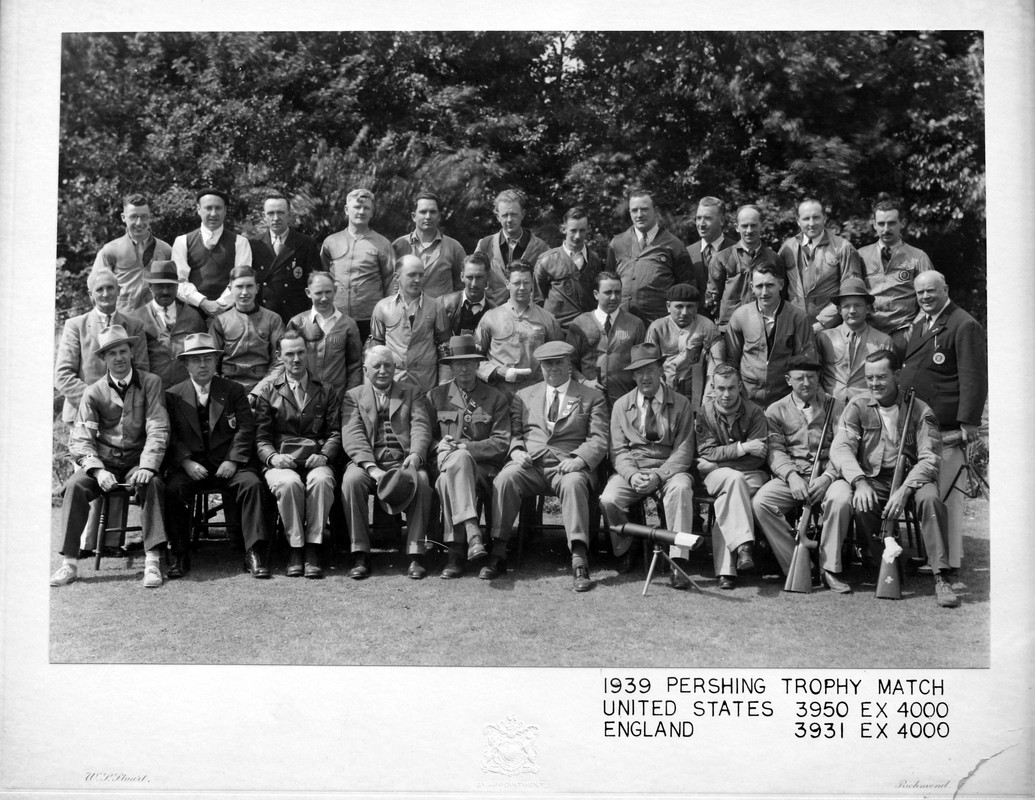 And here's a photo just after the match: 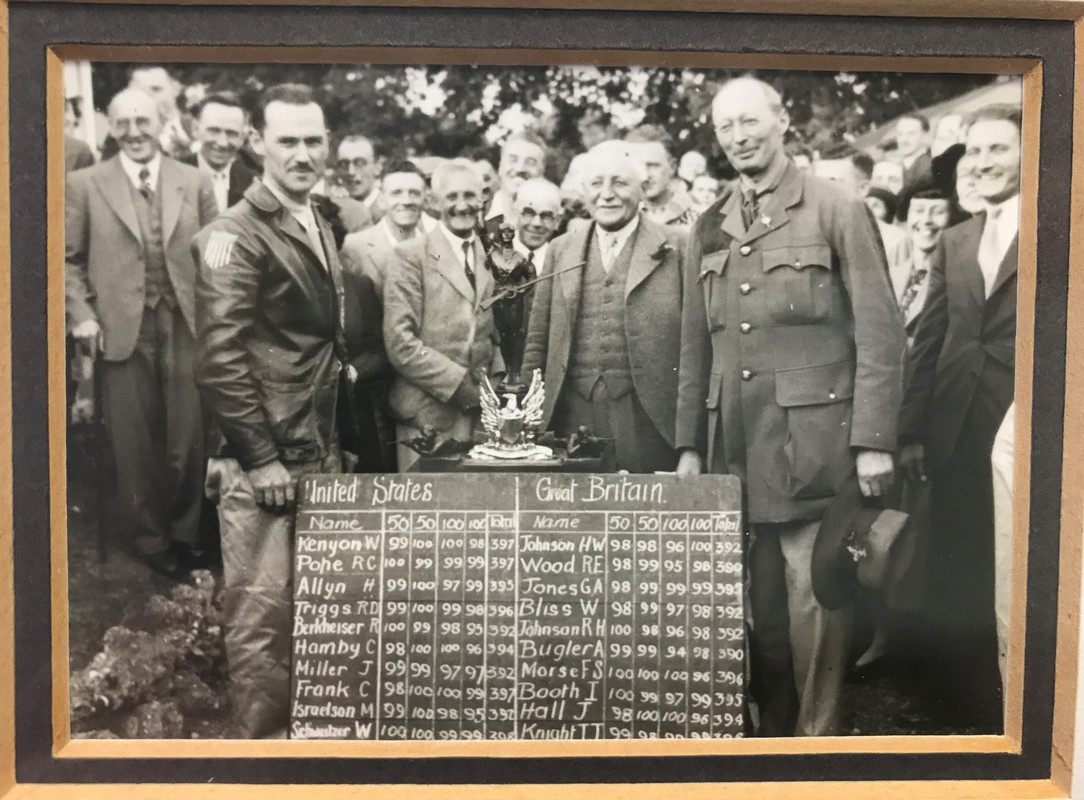 ~~~~~~~~~~~~~~~~~~~~~
On Monday & Tuesday, July 10-11, the British National Small Bore individual matches continued, and the Americans were allowed to compete in many of them. One of these was the Vickers Challenge Shield, which was an iron sight Dewar course. Pope switched to his custom Rem 37, and won the match with a perfect 400x400 score. As the winner, Pope's name was engraved upon the shield (see photo below), he received a cash prize of 50 shillings (~$250 today). and a 9 karat gold medal, which he later inset into the Rem 37's stock. 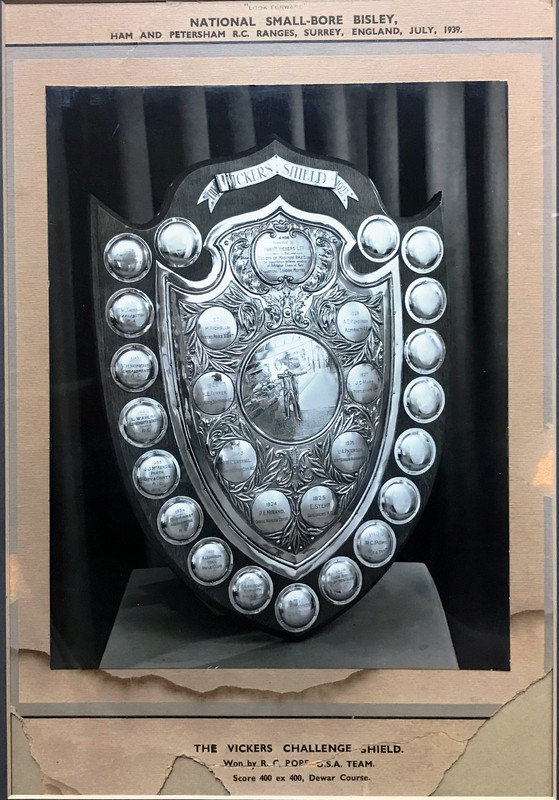 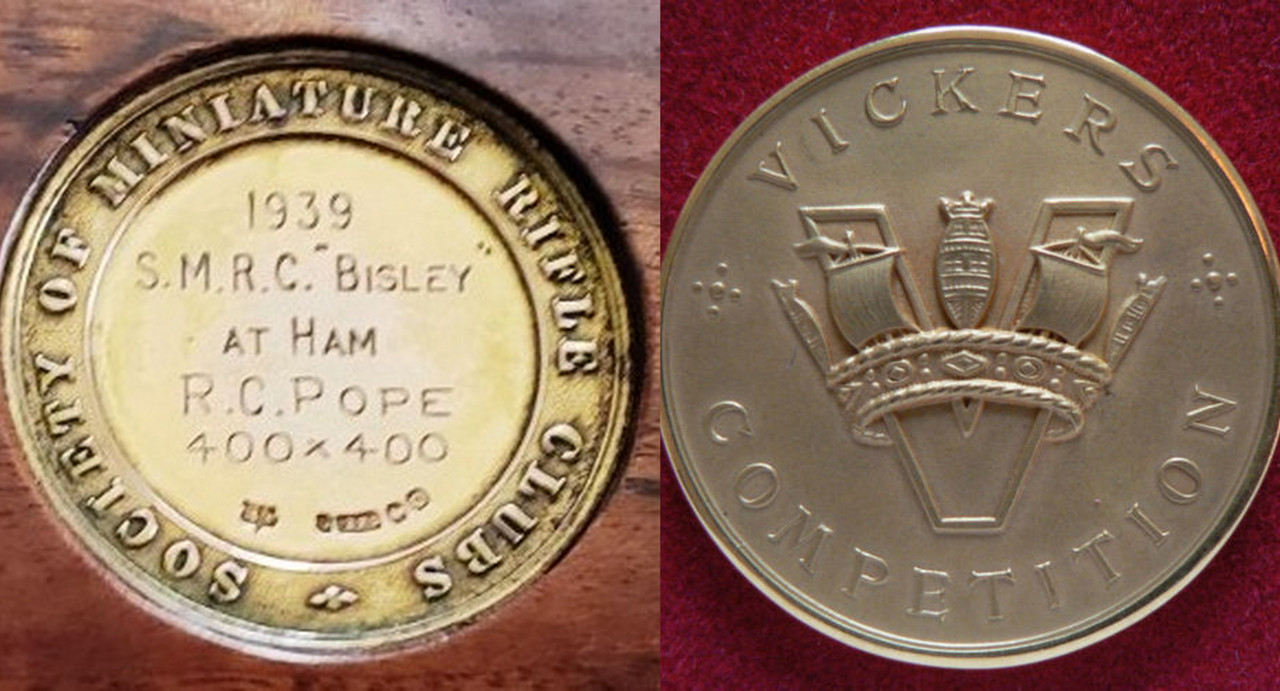 Saturday 7/15 - Thursday 7/20 Return trip was not as fun - a bigger boat (705 ft long), but food and cabins were not as good, and it was crowded with German refugees. Arrived NYC 8am on 7/20, had a nice reception for the team at the NY World's Fair, then the team separated for their return trips home.

Pope's was the last name on the Vickers Challenge Shield, as the trophy, with many others, was destroyed on the night of May 10/11, 1941 in WW2 bombing. See: https://www.nsra.co.uk/index.php/home/reference/history/brief-history

The SS President Roosevelt entered military service in October 1940, reverting to her former configuration as a Harris-class attack transport, renamed the USS Joseph T. Dickman. She saw extensive service, including troop landings in North Africa, Sicily, Salerno, and Normandy (Utah Beach). She then delivered troops in the Pacific for Guadalcanal, and participated in the invasion of Okinawa.

The SS Manhattan entered military service in June 1941 as a fast troop transport, renamed the USS Wakefield and operated by the US Coast Guard. She was big and fast, and played an important role, transporting over 110,000 troops, mostly to England before D-Day.

Special thanks to the families of R.C. Pope and Charlie Hamby, and Brian Woodall at the NSRA (formerly SMRC) for help in putting this together.

As noted above, I have found that early issues of American Rifleman are now available online. Currently available issues are 1923-1941, and 1951-1961.

It's only B&W, and the photos are so-so, but the text is generally clear, and it's in searchable PDF format. You can search the entire collection, or particular years, or individual issues. You will usually want to search "Text contents" rather than "Metadata". I did find that it occasionally missed something, probably due to faulty character recognition, but overall it's very interesting & informative.
Great series of threads that you've started, wonderful rifles and wonderful scholarship. Thank you so much.
© The DoubleGun BBS @ doublegunshop.com